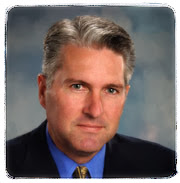 Structural failure refers to loss of the load-carrying capacity of a part or member within a structure or of the structure itself. Structural failure is initiated when the material is stressed to its strength limit, thus causing fracture or excessive deformations. The ultimate failure strength of the material, part or system is its greatest load-bearing capacity. When this limit is reached, damage to the material has been done, and its load-bearing capacity is reduced permanently, significantly and quickly. In a well-designed system, a localized failure should not cause immediate or even progressive collapse of the entire structure. Ultimate failure strength is one of the limit states that must be accounted for in structural engineering and structural design. 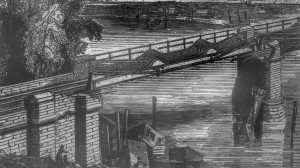 On 24 May, 1847 the Dee bridge collapsed as a train passed over it, with the loss of 5 lives. It was designed by Robert Stephenson, using cast iron girders reinforced with wrought iron struts. The bridge collapse was the subject of one of the first formal inquiries into a structural failure. The result of the inquiry was that the design of the structure was fundamentally flawed, as the wrought iron did not reinforce the cast iron at all, and due to repeated flexing it suffered a brittle failure due to fatigue.

The Dee bridge disaster was followed by a number of cast iron bridge collapses, including the collapse of the first Tay Rail Bridge on 28 December 1879. Like the Dee bridge, the Tay collapsed when a train passed over it causing 75 people to lose their lives. The bridge failed because of poorly made cast iron, and the failure of the designer Thomas Bouch to consider wind loading on the bridge. The collapse resulted in cast iron largely being replaced by steel construction, and a complete redesign in 1890 of the Forth Railway Bridge. As a result, the Forth Bridge was the first entirely steel bridge in the world.

The 1940 collapse of Tacoma Narrows Bridge, as the original Tacoma Narrows Bridge is known, is sometimes characterized in physics textbooks as a classical example of resonance; although, this description is misleading. The catastrophic vibrations that destroyed the bridge were not due to simple mechanical resonance, but to a more complicated oscillation between the bridge and winds passing through it, known as aeroelastic flutter. Robert H. Scanlan, father of the field of bridge aerodynamics, wrote an article about this misunderstanding.  This collapse, and the research that followed, led to an increased understanding of wind/structure interactions. Several bridges were altered following the collapse to prevent a similar event occurring again. The only fatality was ‘Tubby’ the dog.

In 1954, two de Havilland Comet C1 airliners, the world’s first commercial jet airliner, crashed, killing all passengers. After lengthy investigations and the grounding of all Comet airliners, it was concluded that metal fatigue at the corners of the windows had resulted in the crashes. The square corners had led to stress concentrations which after continual stress cycles from pressurization and depressurization, failed catastrophically in flight. The research into the failures led to significant improvements in understanding of fatigue loading of airframes, and the redesign of the Comet and all subsequent airliners to merge rounded corners to doors and windows.

On 16 May, 1968 the 22 storey residential tower Ronan Point in the London borough of Newham collapsed when a relatively small gas explosion on the 18th floor caused a structural wall panel to be blown away from the building. The tower was constructed of precast concrete, and the failure of the single panel caused one entire corner of the building to collapse. The panel was able to be blown out because there was insufficient reinforcement steel passing between the panels. This also meant that the loads carried by the panel could not be redistributed to other adjacent panels, because there was no route for the forces to follow. As a result of the collapse, building regulations were overhauled to prevent “disproportionate collapse”,[clarification needed] and the understanding of precast concrete detailing was greatly advanced. Many similar buildings were altered or demolished as a result of the collapse. 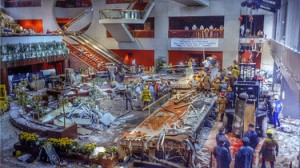 On 17 July, 1981, two suspended walkways through the lobby of the Hyatt Regency in Kansas City, Missouri, collapsed, killing 114 people at a tea dance. The collapse was due to a late change in design, altering the method in which the rods supporting the walkways were connected to them, and inadvertently doubling the forces on the connection. The failure highlighted the need for good communication between design engineers and contractors, and rigorous checks on designs and especially on contractor proposed design changes. The failure is a standard case study on engineering courses around the world, and is used to teach the importance of ethics in engineering.

On 19 April, 1995, the nine story concrete framed Alfred P. Murrah Federal Building in Oklahoma was struck by a huge car bomb causing partial collapse, resulting in the deaths of 168 people. The bomb, though large, caused a significantly disproportionate collapse of the structure. The bomb blew all the glass off the front of the building and completely shattered a ground floor reinforced concrete column (see brisance). At second story level a wider column spacing existed, and loads from upper story columns were transferred into fewer columns below by girders at second floor level. The removal of one of the lower story columns caused neighbouring columns to fail due to the extra load, eventually leading to the complete collapse of the central portion of the building. The bombing was one of the first to highlight the extreme forces that blast loading from terrorism can exert on buildings, and led to increased consideration of terrorism in structural design of buildings.

In the September 11 attacks, two commercial airliners were deliberately crashed into the Twin Towers of the World Trade Center in New York City. The impact and resulting fires caused both towers to collapse within two hours. After the impacts had severed exterior columns and damaged core columns, the loads on these columns were redistributed. The hat trusses at the top of each building played a significant role in this redistribution of the loads in the structure. The impacts dislodged some of the fireproofing from the steel, increasing its exposure to the heat of the fires. Temperatures became high enough to weaken the core columns to the point of creep and plastic deformation under the weight of higher floors. Perimeter columns and floors were also weakened by the heat of the fires, causing the floors to sag and exerting an inward force on exterior walls of the building.

The I-35W Mississippi River bridge (officially known simply as Bridge 9340) was an eight-lane steel truss arch bridge that carried Interstate 35W across the Mississippi River in Minneapolis, Minnesota, United States. The bridge was completed in 1967, and its maintenance was performed by the Minnesota Department of Transportation. The bridge was Minnesota’s fifth–busiest, carrying 140,000 vehicles daily.  The bridge catastrophically failed during the evening rush hour on August 1, 2007, collapsing to the river and riverbanks beneath. Thirteen people were killed and 145 were injured.

Following the collapse The Federal Highway Administration (FHWA)advised states to inspect the 700 U.S. bridges of similar construction after a possible design flaw in the bridge was discovered, related to large steel sheets called gusset plates which were used to connect girders together in the truss structure. Officials expressed concern about many other bridges in the United States sharing the same design and raised questions as to why such a flaw would not have been discovered in over 40 years of inspections.